Navigating the bear market in SaaS sales (with Kevin Mulrane, ex-CRO and 4x VP of Sales) 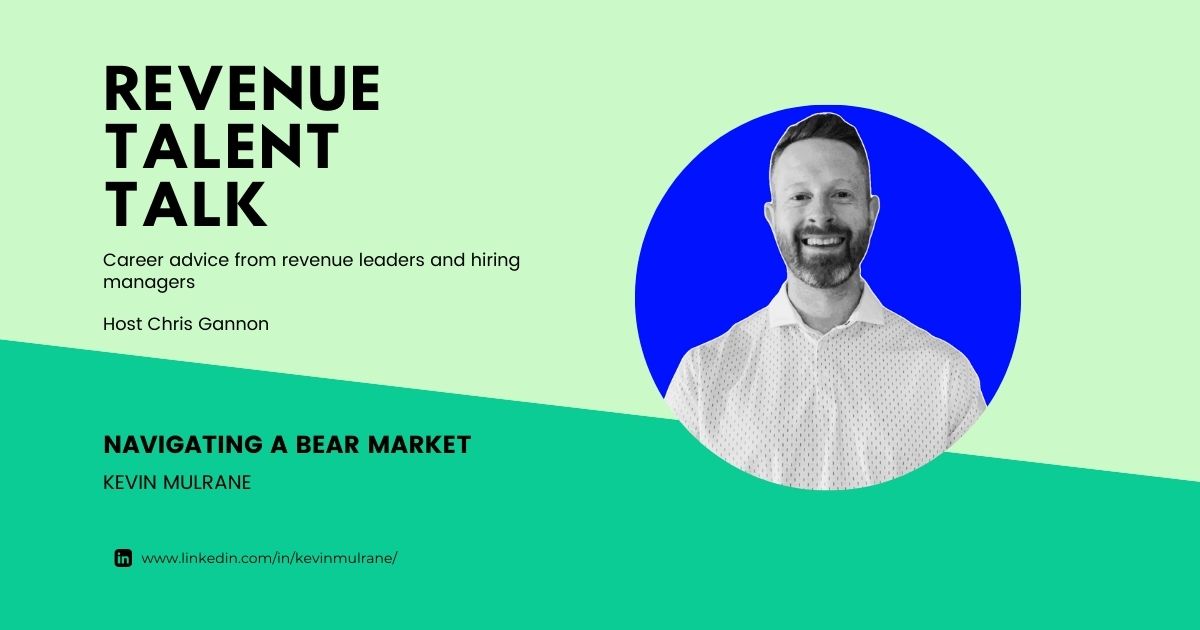 The economy boomed in 2021 after businesses figured out how to work during the pandemic. Now, the market is entering a correction period that’s seeing many layoffs in SaaS.

As we enter a downmarket, startups and growing SaaS companies are facing difficult decisions when it comes to their employees. Do they keep their staff or cut their staff to increase runway?

We’ll dive into how to navigate this bear market with Kevin Mulrane, an ex-CRO and 4x VP of Sales who also worked and survived during the last recession.

3:21 - How to prepare for a recession if you work in SaaS sales

Kevin says it’s important to plan your personal budget, especially if a majority of your income is commission based. Cut the things that you don’t need to spend money on right now. You can always add those things back later.

“If you're in a sales function and a lot of your income is based on your ability to sell and commissions and it's not guaranteed, get your finances and your budgets in order.

Find the things that you don't need to spend money on and cut it for now. It'll come back later. That was one thing I didn’t do during the last recession that I wish I did. I think for me, I knew it was gonna be hard. So I kind of just flipped the mindset and said I'm just gonna have to work a little bit harder now.”

5:43 - Making yourself invaluable during a recession to avoid layoffs

Most companies will typically cut low performing talent and talent that they’ve over-hired for during down markets. Kevin says to avoid layoffs, you need to make yourself invaluable and irreplaceable.

9:25 - Good and bad indicators to consider when joining a startup

If you decide to join a startup, you need to make sure to ask the right questions so you can ensure job security. During a bad market, companies can fail easily if they don’t have enough runway or product market fit. Make sure you’re asking the right questions before accepting an offer.

“I would, I would ask some tough questions around funding runway and how are the decisions around spending capital?

If you are junior, it might be a little uncomfortable to ask those questions. But I would try to get a good sense of like, are they, are they spending like drunken sailors or are they actually being very thoughtful about spending.

I would then go into things around like product market fit and repeatability with revenue motions. Do they have a team that's consistently hitting or is this a replacement role because people aren't performing right?”

12:57 - What SaaS startups can do to win during a recession

For companies that want to survive a recession, you have to focus on your product and the personas you sell to. Kevin says that nice-to-have solutions won’t win in a bear market.

“I think where I would start is to take a look at your product or service and think about why it is more important now than ever before?

And, and who is the product or service for?

Think about, maybe you need to pivot and shift industry shift personas. Think about what your value prop is. It can't be a nice thing. If your value prop feels very much like it's like a nice to have add-on you don't have really strong, competitive differentiation, that's not going to cut it.”

Your company might make layoffs in the next 6-12 months. For your job security, it’s important to understand why those layoffs are being made. Kevin says you should try to understand what was the business decision behind the layoff.

Or was it like shaving a little off the top and hoping things get better. So I would want to understand what impact that decision and that result will have on the business. And then the next thing I would ask is of all the things that I could be doing right, ‘What are one to two things that I can do very, very well, that makes me irreplaceable?’”

After the last recession, Kevin saw many people have side hustles when applying for roles. Now is a great time to pick up a side hustle so that you can lower your income risk in case you are laid off.

“When I started hiring again in 2008-09, all of a sudden we had candidates with these really cool side hustles.

Back then, it wasn't as easy to start a little side hustle.

I think now is a time where like, if you've got a passion project, like go for that too. Maybe that's something you can do on the side that takes you away from the computer and the cold calling.

And if you can start your own little side hustle somehow, who knows what that could turn into. I think that that's also a good, healthy balance and helps you have another stream of income in the short term as well.”

21:25 - Resources to check out to help survive the recession

Kevin says if you don’t have a mentor, now is a great time to network and get one. There’s a lot more access to professionals now through LinkedIn. Use that to your advantage and use mentors who have been through it before to lean on for experience.

“I think LinkedIn, if I was entering early in my career, is where I’d start. It’s hard to cut out the fluff on LinkedIn but look at senior people in your organization, senior people in other organizations. Anyone that you feel like you can approach the conversation that's got the gray beards like us is probably a good thing.”

Just because the market is down, doesn’t mean it’s going to be down forever. And even when it comes up, at some point we’ll have a recession again. You should look at those market swings as an opportunity to grow and come back stronger.

“I was thinking through what we're gonna talk about with the market but the big takeaway is that everyone made it through, right? Even though we had bad times in ‘08-’09, we're still standing, you know what I'm saying?

If you're freaking out right now and you're like, holy crap, look probably the worst that’s going to happen as you come out is maybe you’re a couple pounds heavier, maybe a little bit of a worse hairline, a little gray in the beard. You'll be okay. That's kind of the punchline to like, you're going to make it through.

Focus on building your network and sticking to doing work the right way. Kevin says while it might be easy to cut corners, it won’t help you long-term. You should focus on long-term actions to help build a stronger career even in the short-term.

“You don't need to close a quick deal today to get a quick commission that might blow up later. There are relationships that I built years and years and years ago that didn't turn into anything at that moment but they bloom and blossom into amazing things years later.

Build your network because when shit does hit the fan, you have to be able to fall back on your network. That's going to be your supporting cast with intros and they can vouch for you and all that.”

27:40 - The impact of benefits as the market shifts back to employers

For SaaS sales, we might see companies push back a little more on remote work. Kevin says though, that performance will trump all. If you’re performing well and can show you can perform well working anywhere, you might be able to build a strong case for remote work.

“​​Here's the thing, I think there might be some pushback to remote work.

Companies might want to have a little control on what’s going on to make them feel a little more comfortable. I'll tell you this though, the elite talent, whether it's sales, sales leaders, CS, account managers, elite talent, they don’t want to go back.

I think if you're an organization that wants to find the best of the best, you will have to be accommodating.”

If your office tells you, you have to go back or we’ll let you go, you need to either think about your job or push back if you can prove performance. For some, you will have to go back in the office to keep your role.

“I think the way to have that conversation if you don’t want to go back to the office is to say you really don't want to and then point to the reasons why. Here's my performance.

There has to be a way to have a happy medium here. I think just showing a little bit of understanding and empathy on that side, trying to understand why they want people back in the office is helpful. But it is a really complicated topic because then how do you pick and choose who can come to the office?”